For illustration, we give an example for a specific rating category: 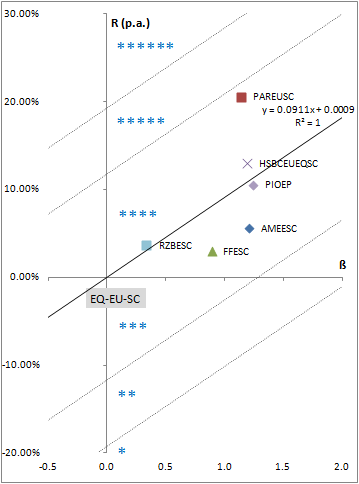 Out of the total number of 1397 funds, publicly distributed in the territory of the Slovak Republic or Czech Republic, 1044 funds connected to 768 portfolios, administered by 37 domestic and foreign management companies, could be selected for rating purposes. These were divided into 104 rating categories, in which each fund could obtain from 1 to 6 stars.

Unlike commonly used fund rating, based on the Sharpe ratio, for the rating purposes the methodology using CAPM model (Capital Assets Pricing Model) was applied, which evaluates the relations of risk and return of each fund in a more complex way, depending on the risk and return of other funds in the relevant category by calculating Jensen´s Alpha.

Based on the bands, created on the basis of volatility in the relevant category, in which individual achieved Alpha values of the rated funds are placed, the funds could obtain from 1 to 6 stars.

The first 3 stars were obtained by those funds that achieved negative Alpha and the other 3 stars by the funds that achieved positive Alpha value. E.g. 6 stars were obtained only by the fund the total return value of which exceeded the band created by sum of average return of the respective category, increased by 1.64 volatility multiple, applicable to the respective risk rate, measured by Beta coefficient. Theoretically, there should be maximum 5% of funds of the respective category in this band. Bands are created as shifts of SML line (security market line).

Company C-Quadrat became the most successful company, 80% funds of which achieved positive Alpha value, followed by companies Aberdeen (68%) and Conseq (67%). Out of the total number of the funds rated only 9% obtained the maximum of 6 stars.